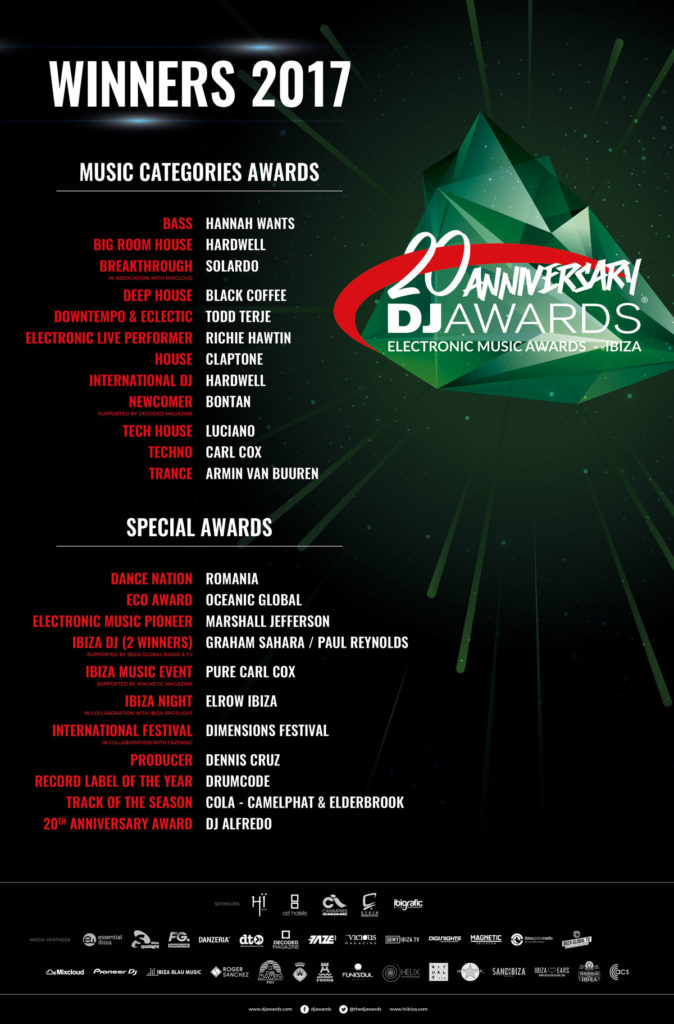 Oh what a night! DJ Awards have officially turned 20, with a night of great vibes and high emotions. For two decades, the non-profit organisation has been supporting DJ culture, and last night the celebrations reached a spectacular high with their anniversary edition at the most talked about new venue, Hï Ibiza.

Undeniably the most memorable edition to date, joining the line-up of the awards were some of electronic music’s biggest names. Henry Saiz live band entertained the packed venue before the ceremony, to an invited audience of the music industry that decamps to Ibiza every summer.

Des Paul and Lucy Horobin hosted the gala presenting 20 awards. DJ category award winners that were voted for by the music fans, plus the special industry award, chosen by a panel of music professionals.

Mohamed Moretta who had come straight off The Just Kool World Tour performed the classic “Celebration” live during the interlude.

One of the most popular Industry awards Ibiza DJ, went to two well deserved winners this year, Graham Sahara, celebrating his own 20 year milestone on the island and Paul Reynolds, whose rise has been progressive over the past 10 years in Ibiza.

Other awards presented during the night went to Drumcode for Record Label of the Year, with founder Adam Beyer. Big Room House had the fans going into overdrive with their support for the Dutch DJ Hardwell. Ibiza Music Event was won by Pure Carl Cox, who this year staged two massive events at one of the worlds largest clubs, Privilege bringing back the art of the what parties were like back in the day. International DJ went to Hardwell, his second award that night. Electronic Music Pioneer was given to the legend and father of Chicago’s purest House, Marshall Jefferson. Electronic Live Performer went to Richie Hawtin, who triumphed this year with his “Close” tour.

Elrow Ibiza took home Ibiza Night; a night that has been sold out from day one. Track of the Season “Cola”, picked up Camelphat & Elderbrook, was heard across every club’s dance floors. Dance Nation went to a hugely successful nation, with many emerging artists, clubs and festivals, Romania. Representing their country were duet GruuvElement’s.

Black Coffee’s applause by the crowd as he collected for the Deep House category confirmed just how loved this South African is. This is his second year at the top and long may it live!

Newcomer fell on the young DJ and producer Bontan, who has a meteoric career in both his productions and performances. Trancewinner, Armin van Buuren, the Dutchman continues his reign with his 10th consecutive victory.

The British duo Solardo, collected Breakthrough, undoubtedly deserved by the success they have achieved during the year.

Eco award, a newly created special award which aims to highlight those who promote projects to improve the environment by making themselves known through electronic music, was collected by Oceanic Global, promoting projects such as the importance of the conservation of our seas and oceans in general.

International Music Festival winner was Dimensions Festival, a British festival held in Croatia and which has become the Mecca for electronic music fans. Producer was won by Dennis Cruz, from Madrid, this young Spanish producer has been the undisputed number 1 in the best-selling lists in 2017.

Tech House and Techno, two of the most voted for categories in the history of the awards, were announced, with two of the most beloved producers and DJs on the scene. Luciano, one of the hardest working DJ’s this summer, he continues to prove his versatility by playing across many different events on the island. And of course, an award favourite the great Carl Cox.

Closing the gala, with a very special 20th Anniversary Award, this award was created as a one-off to celebrate the recipients’ history and influence upon electronic music. Fittingly presented by the Founder of the DJ Awards, Jose Pascual, who paid a tribute to the man who is know as one of the Godfathers of the Balearic sound, DJ Alfredo.

The final curtain came down, but not before the winners blew out the candles of a rather clever virtual birthday cake. Doors opened for the after party and Hï Ibiza was officially packed all night long, with a soundtrack from Luciano followed by Solardo, Agoria and Nic Fanciulli in what has gone down in the DJ Awards history as one of the most special and emotional nights of 2017.