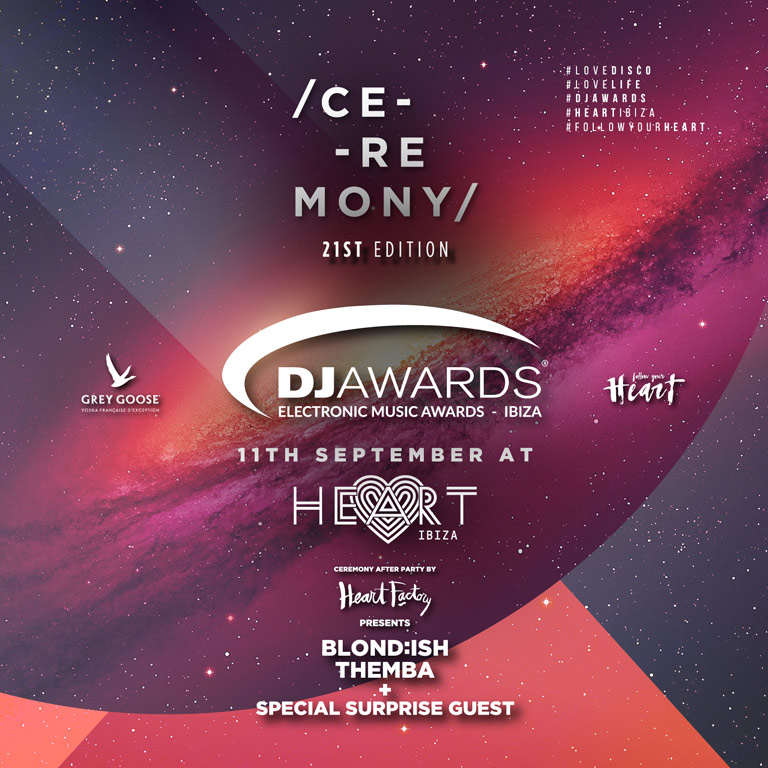 As the Ibiza season begins to wind down, the DJ Awards is polishing off those glitterballs ready to kick off its 21st edition at Heart Ibiza on Tuesday, 11th September.

Considered the “Oscars” of the electronic scene, the theme this year pays homage to the music which sowed the very first seed of the “DJ”, Disco!

The ceremony will be presented this year, for the first time by two well-known Ibiza faces, Katie Hayley Knight,a multi-talented lady, who presents on both radio and tv, whilst managing the press for Amnesia. Her co-host, Graham Sahara is himself an award-winning DJ, Producer, head of a record label, Director of Pioneer DJ radio. Both extremely skilled in the art of multi-tasking!

Held for the first time at Heart Ibiza and sponsored by Grey Goose, this venue has stood out for capturing the true spirit of Ibiza by breaking the mould with its fusion of Gastronomy, Art and Music at the highest level and represents the perfect setting for the awards.

The ceremony will be preceded by the annual press reception which brings together all the media and artists and will be held at the OD Ocean Drive Hotel, belonging to the OD Hotels group which, since its foundation in 2009, has been an active part of the awards. Sponsoring the accommodation to the winners and media partners, they also support musical talent of the electronic music.

The winners of the prestigious Kryptonite will receive a pair professional headphones courtesy of Focal. It’s going to be a ceremony with some surprises, you can catch up with all the news live from the ceremony from both the DJ Awards and Heart Ibiza Facebook.

Following the ceremony, the party begins with one of the island’s successful nights: Heart Factory party featuring a stellar line-up including Blond:ish and Themba, with a special surprise guest.